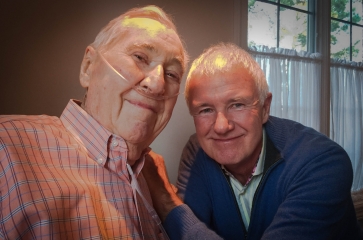 Susan’s father, Don Perkins, and I on the surface were very different men. We were brought together out of our mutual love for Susan. And yet, in my mind we were starkly contrasted people- I, the creative educator and medical intuitive and Don an international corporate leader.

One of the great gifts Don gave me was that I absolutely learned to follow was the promptings of my heart and not the noise in my mind. 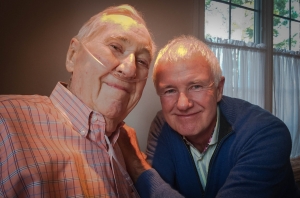 To me it was a surprising lesson to learn from a man who was very successful in the corporate world. He was highly principled, a mentor to business leaders and a man respected for asking hard questions.

At times my mental reaction to Don’s questions verged on the edge of craziness. But the love between us, wondrous and mysterious would activate a pulse in my heart that moved me beyond the noisy and demanding reasoning of my mind.

Susan and I knew that Don was very ill when we went to visit he and Jane, his wife, at the beginning of March. In classic clarity, he described how he did not want to die chemicalized and suffering. We asked he and Jane if they would like us to be there to care for them. He said yes because we had the most experience.

Love was leading the way and we dropped into the rhythm of caring for him as his body moved to the point of eventual death. 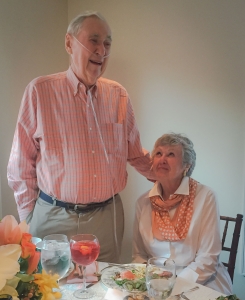 One of the gifts of this experience is that I watched Don demonstrate clarity, integrity and most importantly completeness with everyone around him. He knew he was going to die and chose to be absolutely present so that he would have no dangling fragments of unclarity after he was gone.

He had mentored business leaders and many came to see him to say thank you. He had a visionary message that he delivered for each family member at his 88th birthday family gathering three days before his death. Don and Jane were married for 30 years and what always moved me was the unmistakable love between them that they shared with the family.

I was present in loving and surrender watching a man seemingly so different than me model courage and clarity in the most beautiful of ways.

As the days went by I could feel our hearts joining in ever-greater ways. Few words were said but there was a gravity change and love was the new gravity that let us be together. 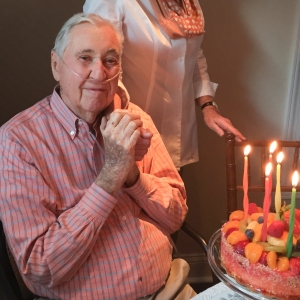 We could see one another and I felt seen as never before by this man whom I always loved and respected but in the beginning didn’t really know how to connect to.

The arrival of a hospital bed in a home when someone is dying is always an important day. The person knows it’s where they are going to die. And usually it’s a very welcomed and comfortable place to put their body.

Don only spent one night in that bed and that night I was his caretaker. He was pretty active, and I was up and down from the sofa I was resting on a few feet away from his bed.

At one point he sat up, I came in the room and in seconds he went to his knees on the floor. I bolted around the bed and caught him just as he was going over. Jane, his wife, had heard the thud as had Susan and in seconds they were each there. As I was holding him, I could feel the warmth of his body and the stutter of his breath.

I checked for pulses as Susan touched his face and called his name but in moments we knew he was leaving. At the many deaths I have been around, it was the most gentle and gracious of passages.

When he left there was rush of radiant light and warmth that entered my body. A luminous bath of love is all I can call it. I can still feel it now.

With the man who died in my arms, I learned that love as the living force that surrounds us is vast and fiercely present and so much bigger than my thoughts of separation, demand, or even loneliness.

I am forever changed. His presence and his death have brought me into greater harmony with all the experiences of love I have ever had in this lifetime.

I offer this as a gift to you so that you might attune yourself to the presence, the life force of love and know that it’s bigger and can move you even at times that seem impossible because your mind, your personality, wants something to be so different.

Let’s all be truly moved in the days before us by this current of love. Don Perkins taught me to trust the greater voice of love. I am so thankful to Susan and to my life for bringing this man as a great teacher to me. I bow in honor to each of us and to the glimmering truth of our sacred nature.

Even when there seems to be great difference, there is always the common ground of the heart.